Prior to use moving back to England from China the pollution was hitting sky-high, meaning dangerous to breath levels in and around Beijing. As the husband was also travelling I decided to abandon the lovely suite in Kempinski Beijing, pack our bags and head to Philippines via Hong Kong – just me and the kids.

Lot of people told me I was sort of crazy for doing this alone and with such a short notice, but what can I say other than that we are sort of an impulsive family living for the moment. And it all went well in the end, except for some minor issues such as me getting a food poisoning the night before our Bohol trip…

So we did a bit of island-hopping too once I read that the best island to go to is Palawan, more specifically the far end of it called El Nido. We never quite made it all they way to El Nido, as the island is truly rural and it would have taken from Puerto Princesa about 6 hours o little motorcycle-cabbies on super-bumpy roles. Also, the idea of staying in  plush luxury hotels on stilts made me bit scared with two under fours who didn’t quite swim yet. But next time those remote white sandy beaches will be conquered! 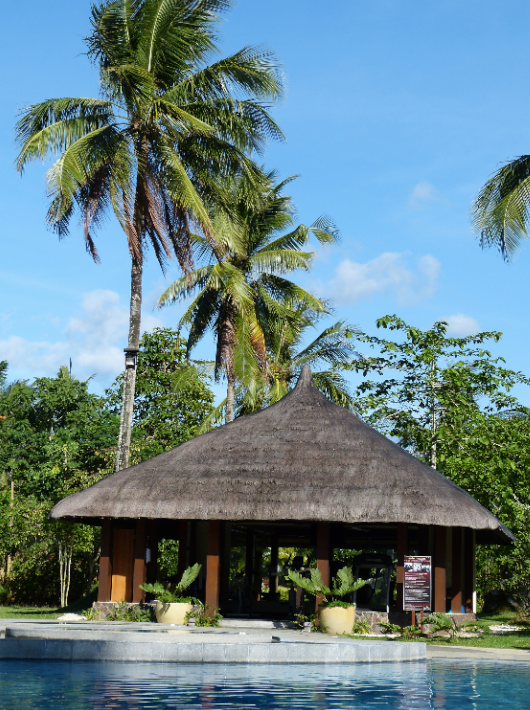 So I settled with what I thouht was the next best thing, and it was quite all right for us – as you can tell from pictures we pretty much had all the pools and play area for ourselves in the resort. The sea water was also warm and clean (not quite as warm as Bali was a month before as it topped 30c there…), although the sea got quite rough in the evenings. Our resort was called Sheridan Beach Resort and Spa in Sabang Beach, some two-hour drive from the Puerto Princesa airport.

Sheridan is rated 5-star, but I am a bit picky about these things so I’d give it max 4 star – then again I think 5 stars is more about having certainly amenities available such as room service, spa etc..and for the location it probably was pretty nice. I’d also recommend getting a room with a pool view – you can still have the mountains as a gorgeous backdrop but can also supervise bigger kids from your balcony or terrace, depending whether you are located on the ground or first floor.

What was great about Sheridan was the both the location right on the beach, as well as the pools on site – a really long lovely pool with a bar in the middle, a kiddie pool and three smaller pools which the sun would warm up during the day up to hot tub level.

They also had a spa onsite, but with western prices, and for a massage one could just venture outside and walk a couple of minutes and get one for about $4/£2.50 in one of the local places! The real Philippines is dirt cheap, whereas the touristy side in often over-the-top expensive.

The village itself runs along the beach and there is another resort next door, Daluyon. it looked rustic with little two-story huts and also a bit run down. However, their restaurant is definitely worth a visit as it is ranked very high. I met a French-Finnish restaurant-owner family in our resort. They were also looking for culinary inspirations and we joined them on a meal in Daluyon and it was delicious from the cocktails to the desserts.

The food in Sheridan resort was not remarkable – a mix of western and local food (lots of rice!). I think the best part of it were the fresh mangoes which grow locally. The breakfast and dinner buffets certainly had something for everyone’s liking so we didn’t go hungry. I encourage my children to try new foods, but I am not too keen on forcing them to eat things they do not like (thinking of my own childhood and how my taste buds have developed since…). As they all love rice and fruit, the food in Philippines worked well for them as it’s not spicy either.

If you are looking for relaxation and break from the rest of the world this is the place to be – the Internet is limited and works only in the pool area (when it works at all), but this is more of a sporty diving and exploration holiday than an ultra-luxury place, so get your mind-set ready for new challenges and “old-fashioned” ways!

Locally there isn’t that much to do other than the famous underground river, a hike to little waterfalls (good shoes as the rocky beach is otherwise painful!), zip-lining, biking and of course swimming and snorkling. You can go on day trips (or longer trips) either by booking tours from the hotels or in the village itself (much cheaper).

I’ve already ventured to Philippines in some other earlier posts, which you can read here: