Forbidden city (Gu Gong in Chinese, which means Former Palace) and the Tian’anmen square in front of it probably are the second most famous sights in China, after the Great Wall(s) of China. This area has many imperial palaces from the Ming (1368-1644) and Qing Dynasties (1644-1911) (see also my posts of the Ming Dynasty tombs and Qing Dynasty tombs). And what an amazing place it is: it is hard to comprehend the sheer size of the very symmetrical area, which has well over 2000 buildings and 9999 rooms!The largest building of course is the famous Imperial Palace, which is divided into two parts: the front court and the back chamber.

For my visit I waited for the summer to be over in the hopes of avoiding the crowds, but it seems that there are always tons of tourist visiting this place – even on a week day in late October. The basic entrance fee is not bad – 60 RMB (less than 10 USD), and there are two additional charges if you want to see the other exhibitions, totaling less than 30 RMB in fees.

Since the area is so large; 183 acres (or 74 hectares), you have a choice of different routes – the one in the central or either east of west side, each of which have 6 large palaces. The things I found interesting in the area (besides just wandering around, which I did for several hours) were the exhibitions of royal furniture and clothing, golden tea sets and the amazing clocks, which were gifted by heads of nations all over the world. One of the most interesting buildings for me was an old outdoor theatre and the building opposite to it where the empress sat and watched the performances.

One thing to know though is that you are supposed to walk through the palace area and exit at the other end (over 900 m away from starting point), so keep that in mind if you have a driver picking you up. Also, when you take the exit there is a park called Jingshan right opposite to the Forbidden City. It is rather small and the entrance fee is only 2RMB (0.3 USD) – it would worth seeing in itself, but the main reason why you should climb up to this park is the unbeatable views over the Forbidden City, Beihai Park – and the city center in general. Those views are breathtaking, even on a foggy day. See my second post for more pictures on Forbidden City and Jingshan Park {see part2 here}. People rub these knobs on the massive gates for good luck (and this is why probably some are missing too…) – For Chinese red and gold (or yellow) are lucky colours. Yellow means respect and yellow roofs were only used in imperial buildings, and red walls stood for emperors hope for national stability. Green roofs in Forbidden City were the residences of imperial children. Should have brought someone with me who can read Chinese! Not every buildings is accessible for tourist, but certianly many enough Some of the buildings have really beautiful detailed decorations Once you proceed beyond the Imperial Palace and deeper into the grounds there are less crowdss as people disperse in different directions (note that there aren’t always sings to steer you or they might be just in Chinese, so be ready to just explore your way around the place…) 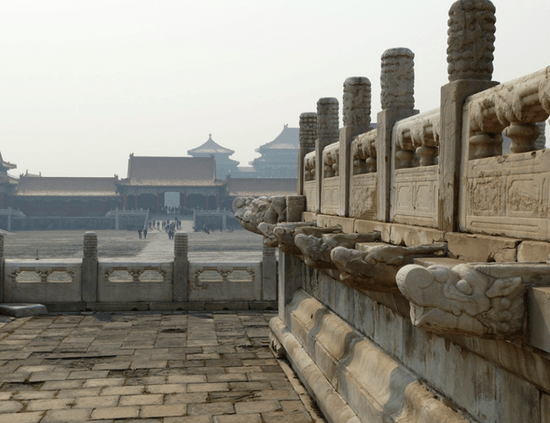 Every building and staircase have carved details Many buildings are empty, but some remains of grandeur can still be seen 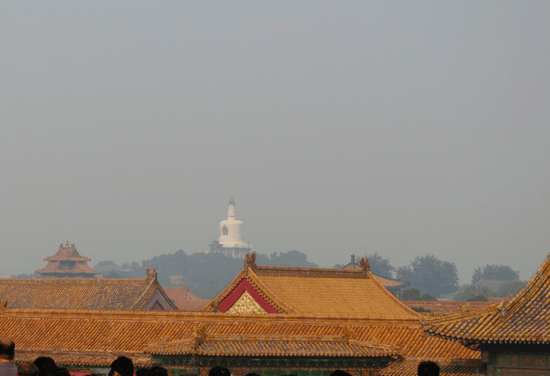 I love the entrances and gates in Forbidden City – beautiful details and vibrant colours everywhere! Amazing doorway and the ornate ceiling I found this elephant very cute “So many things to see here – book at least half a day for this destination, and avoid weekends and high tourist seasons. Well suitable for kids too, but you’ll end up walking a lot. You get a great mix of history of Ming and Qing Dynasties: buildings, clothing, artifacts, presents given to the Imperial family. You find interesting tidbits such as the last emperor’s study area and first phone line in Beijing! At the end of the visit go to the Jingshan park for an overall view of the grand Forbidden City – very impressive. This is a visit to remember!

Note: If you are using a taxi tell them to go to Gu Gong, or they will not likely understand where you want to go to“