I decided to do something different for this week’s #IGTravelThursday – a summary post of great things to see in our former home town Beijing: I’ll  probably do a couple of more similar posts later on as there are so many cool things to see in and around Beijing! We visited, of course, all the most famous sights, but also a whole bunch other less known one – some of which are truly amazing and unique.

When one thinks about China, the first things that pop into one’s mind would be the Great Wall, The Forbidden City, Tian’anmen Square, the Terracotta soldiers in Xi’an and of course the giant pandas in Chengdu. But if you are not touring around the country but rather staying in Beijing, try some of the less known places to visit also! 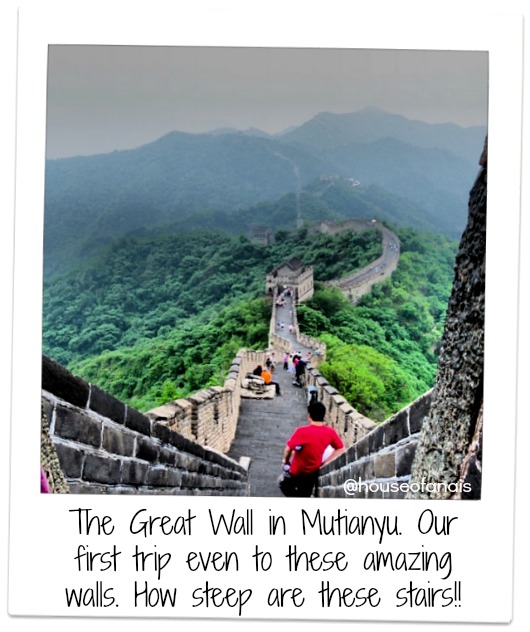 The Great Wall was one of the first things we visited in China. This section is in Mutianyi and the official section gives you a good day’s worth of hiking. We took the cable car up, did only about 6 stops from one watch tower to another (mainly downhill) and the walked back down to the village. See a full post here about visiting this Mutianyu section of the Great Wall. 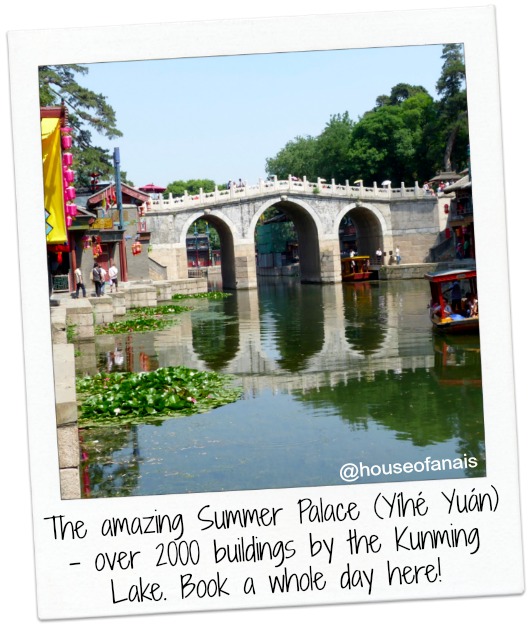 The imperial Summer Palace in within the city of Beijing although it looks like a completely different world where time has stopped. But once you climb up the hill to visit the Tower of the Fragrance of the Buddha and can see the Kunming Lake and the high-rise city skyline behind it, you will be quite in awe of contrast of old and new. The summer palace has 2000-3000 buildings depending on how you count them, so you can easily spend a day here. I’d recommend taking a boat tour on the lake or along the little canals too. See a full post here about visiting the imperial Summer Palace in Beijing. 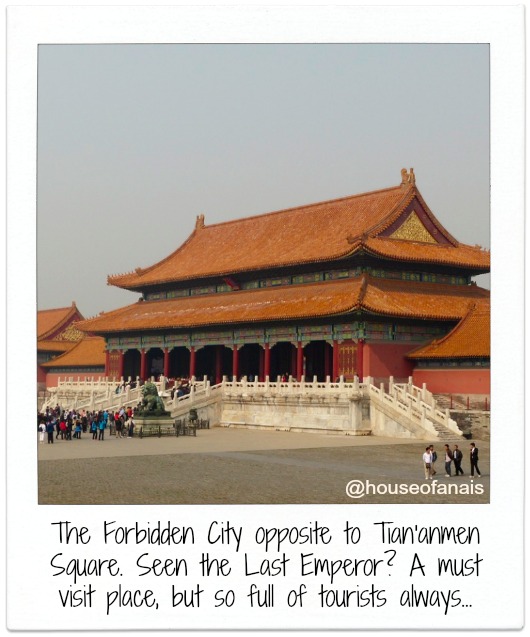 The Forbidden City is the worst tourist trap after the Great Wall of China, but still so worth visiting. Once you have passed through the first few gates and temples, the vast, symmetrical area sucks in the people and it’s actually rather a peaceful experience to explore the some 9000 rooms of the palace area. Once you have walked throuhg the areaand exit on the opposite side of the palace, do cross the road and enter the park opposite to the exit: the Jingshan Park: once you have climbed up to the pavilions an amazing view of the Forbidden City, extending to all the way to White Dagoba in the Beihai Park (provided that there isn’t too much smog in the air, of course). See my two posts on the Forbidden City (and JIngshan Park), the home of the last emperor of China, located in the middle of Beijing. 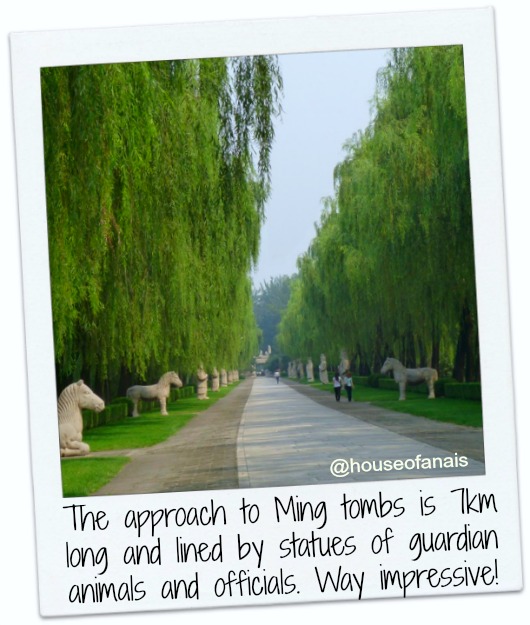 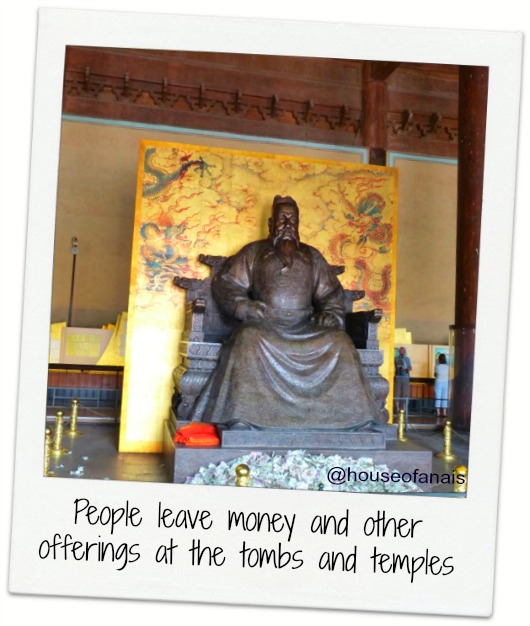 The Ming Dynasty Tombs are some 42km/25 miles northwest of Beijing and part of a country wide Ming and Qing dynasty tombs designated as Unesco World Heritage Sites. Currently three of these thirteen tombs and the approach are ope for tourist, and the area is very impressive (and large)! Read a full post here about visiting the Ming Tombs near Beijing. 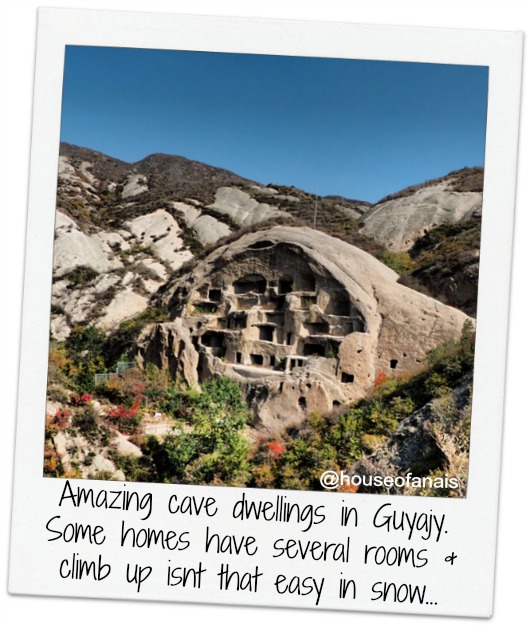 These Ancient Cliff Houses – (Guyajy in Chinese) date back to the Tang dynasty, some 600-900 AD. They are good 1.5-2 hours drive from Beijing (depending on the traffic). As you pass on the way several sections of the great wall, you can easily combine these two destinations. We actually did a stop in the Juyongguan Great Wall loop, which is close to Badaling (the most popular and overcrowded section of the wall). The walk around these caves is pretty, but there is no food in this destination as there aren’t very many tourists at all. Read a full post here about ancient cave dwellings in Guyaju near Beijing. 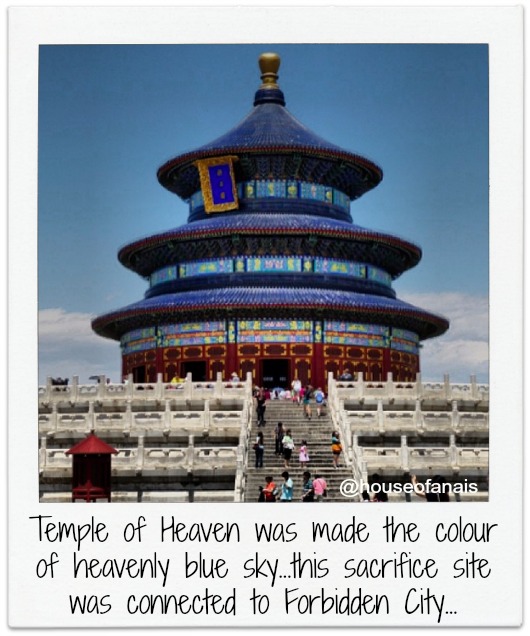 Tiantan, the Temple of Heaven with its heavenly blue roofs is certainly worth a few hours. Originally connected to the Forbidden City, it was the site for sacrifice for the emperors. The buildings are beautifully restored and one can also watch (or join in) the Chinese people dancing traditional dances, playing Chinese Yoyo and other cool things. The park is perfect for a little picnic also… Read a full post here about the heavenly blue temple of heaven, Tiantan in Beijing.

So that was my first Beijing 6 list – in no definite order of preference. But there is so much more to see from the Pandas in Beijing Zoo to Tian’anmen square, The Botanical Gardens, wild sections of the Great Wall, from the old hutongs  to hikes and temples in the mountain, so stay tuned for future Beijing top tips!