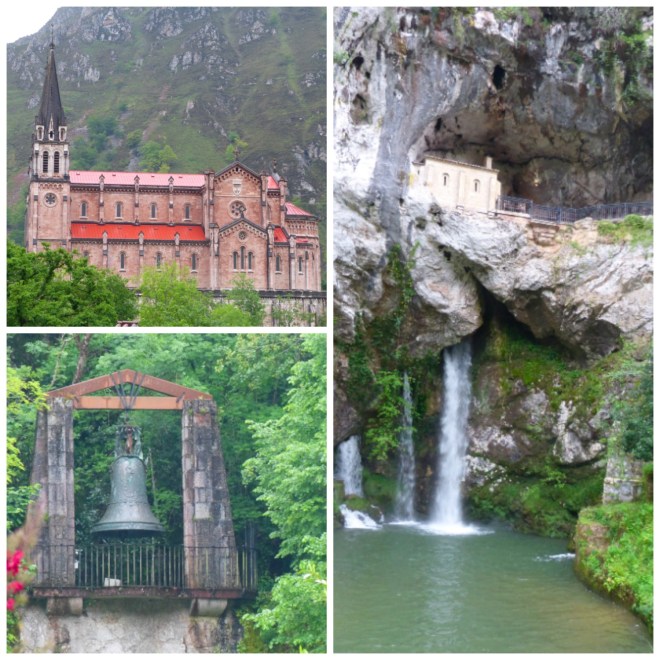 Greetings from Sanctuary of Covadonga and Cangas de Onís in Asturias. These two places were part of one of my day tours to the eastern parts of Asturias – covering the beach of Ribadesella, ancient Tito Buscillo cave,  crossing the mountains  all the way to Covadonda Lakes before returning back to Mieres again (read about all the things I did in Asturias in this “Asturias in a nutshell” -post).

Covadonga is an important place for the Spanish people because it was a site for the first battle between Christians and Moors in 772 which the Christians won. The area itself is within a National Park and features a chapel (Santa Maria) inside the rocks, on top of a waterfall,  hermitage, basilica of Santa Maria among other things. Next to the basilica there is also a beautiful hotel, Gran Hotel Pelayo (amazingly the rates start there as low as 55 euros/night). 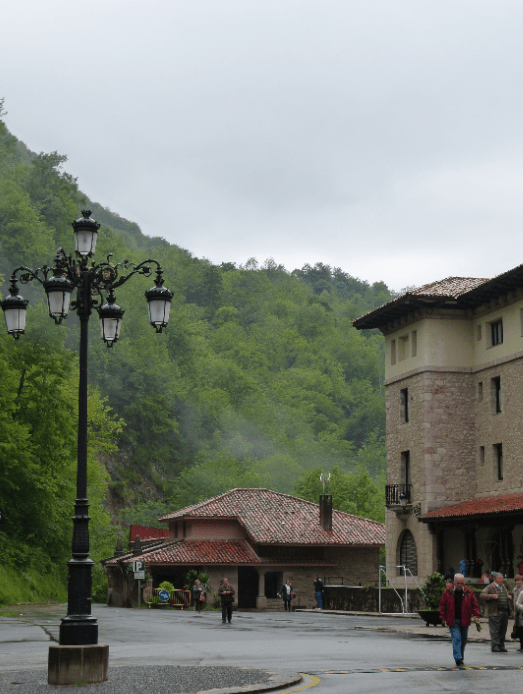 Museum of Covadonga, where there are jewels and paintings on display, among other things 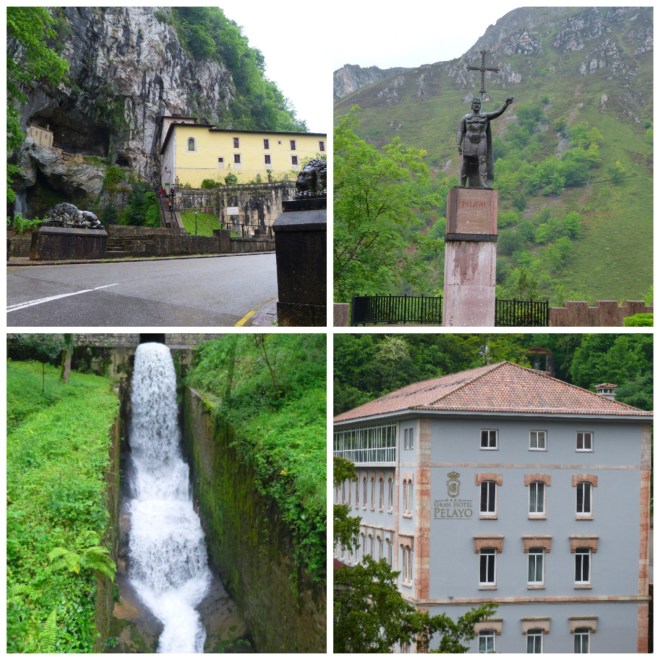 No matter what the weather, Covadonga is still breathtakingly beautiful area with views sweeping down the valley 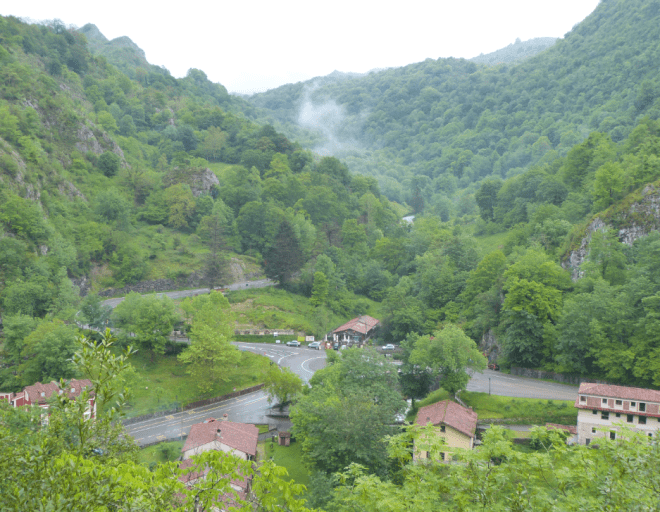 It was a humid, time to time rainy day when I visited Covadonga and that gave the area a bit mystical look. The beginning of the road up to the lakes, Lagos Covadonga, can be seen here on the background, disappearing into the forest. 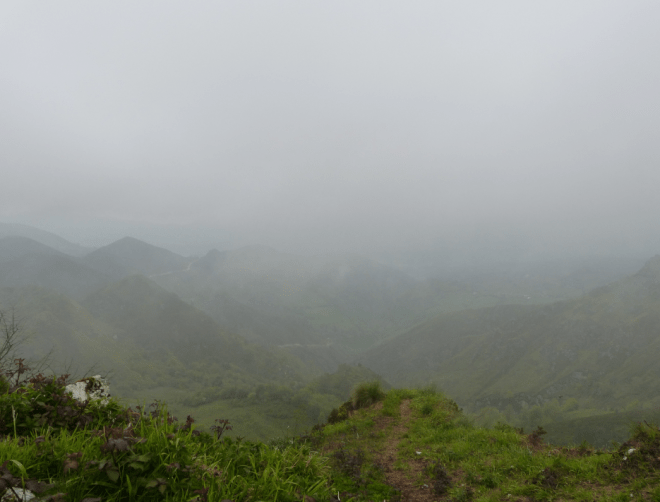 On the way up to Lagos Covadonga (the lakes of Covadonga). The fog got so heavy that I had to turn back despite being almost at the top. I nearly hit a cow that was walking on the roadside as the visibility was nearly zero. Also parts of the road had collapsed and I did not fancy falling down the steep hillside, so I had to take a rain check. The famous bike race La Vuelta normally passes the lakes – if it happens to be a foggy day it must be pretty dangerous for the cyclist! 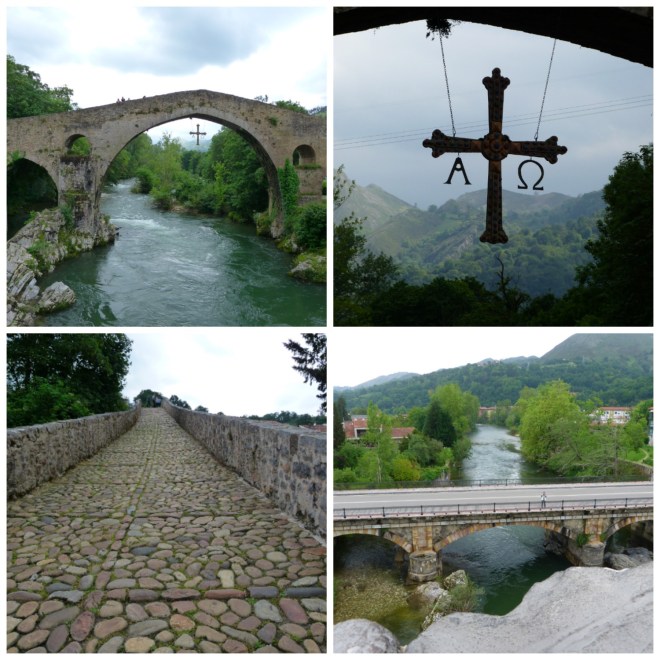 Covadonga is part of the province of Cangas de Onís, which used to be the capital of Asturias. Cangas de Onís is best known for the hump-backed roman bridge stretching over the River Sella. The city is really beautiful and worth a stroll. One can also taste many local ciders here (ciders are the specialty of Asturias) and enjoy a great three-course meal in one of the many restaurants in the city. 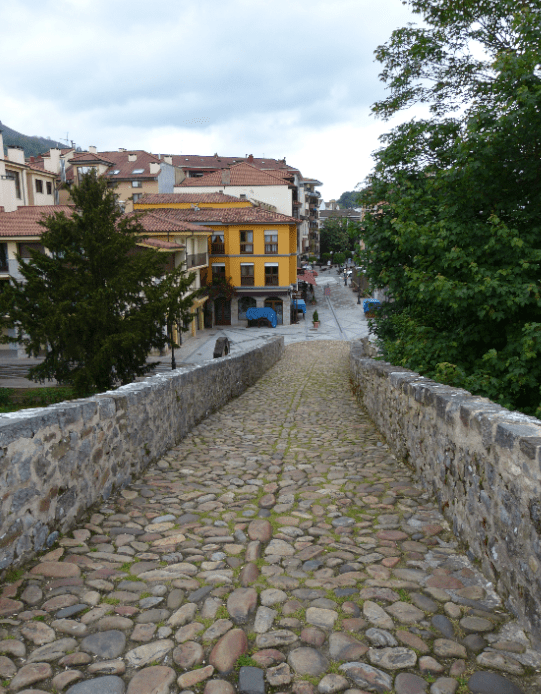 One can still use the bridge to cross the river Sella 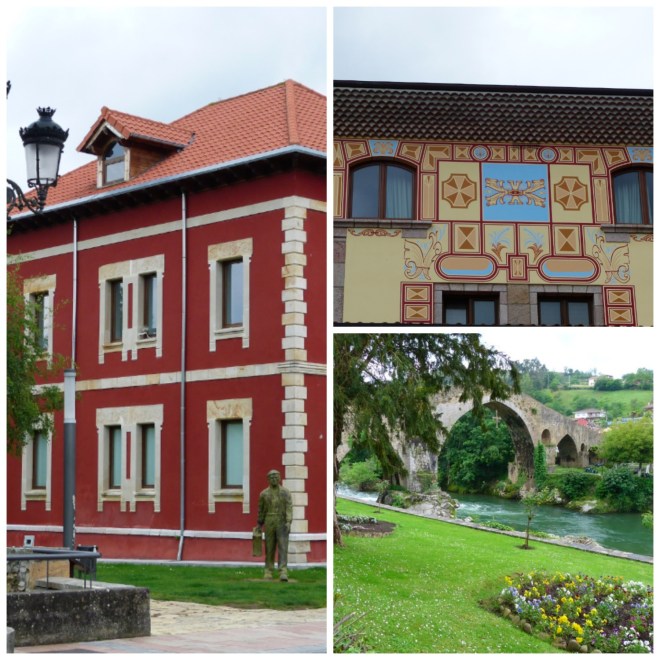 The architecture is worth another look in Cangas de Onís, especially traditionally built and painted houses