This was supposed to be a story of a little island adventure in Holy Island: exploring a castle, some ruins, beaches and finishing it off with a nice meal. But..it didn’t happen and I can just say that we have a lot to learn about the Atlantic tide. Back in Finland I’ve never really noticed the tide because the sea is tiny, shallow and inland, so England seems to be the total opposite – you can see the difference in minutes and it really goes up and down! 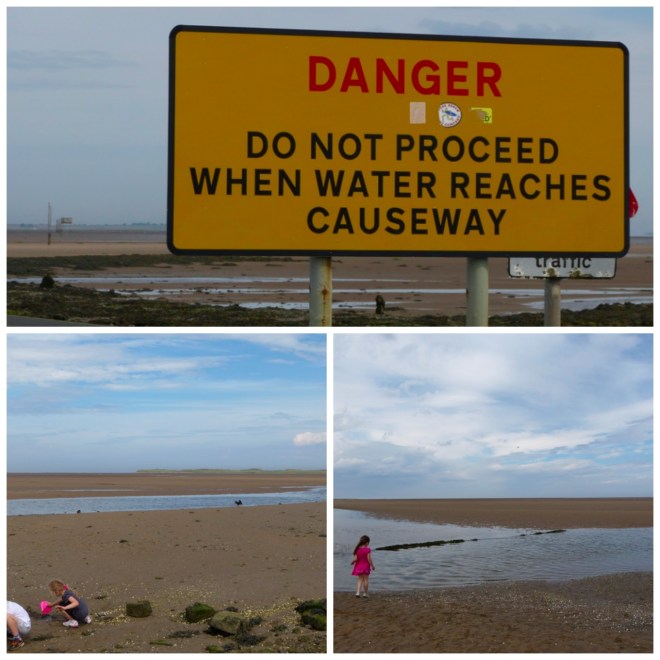 The access to Holy Island is through a stretch which during the high tide can cover your whole car (for the non-believers there are photos on display). The tide times can be nearly an hour off from the previous day, and we arrived to the crossing 15 minutes after the warning time which lasts about 6 hours. I guess we could have still sped over, but would not have made it back until late at night, so we decided to experience the rising tide for a while.

I couldn’t believe my eyes how quickly it all happens: see the picture above on the left – barely all water at all and some kids are walking in the water. Take five minutes later (the photo above on the right) and you can just see the water rising in front of your eyes. Clearly not everyones believes it as we saw some people getting the shoes and more wet when the water started rising!

This was a non-adventure that became a new kind of experience, a mini adventure of a sorts. The kids had a change to waddle in the water for a few minutes (rather cold), catch little fish and pick the prettiest sea shells as the sea floor was covered in them.

Afterwards It was fun to watch the tide rushing in (after we ran from the bottom to our car and drove a bit higher, I should add) and also educational, especially for kids. Seeing is just so much powerful that just trying to explain something for little ones… And what happened next? We picked up the map, found a new place to visit and hopped on the car! But that’s another story for another day…